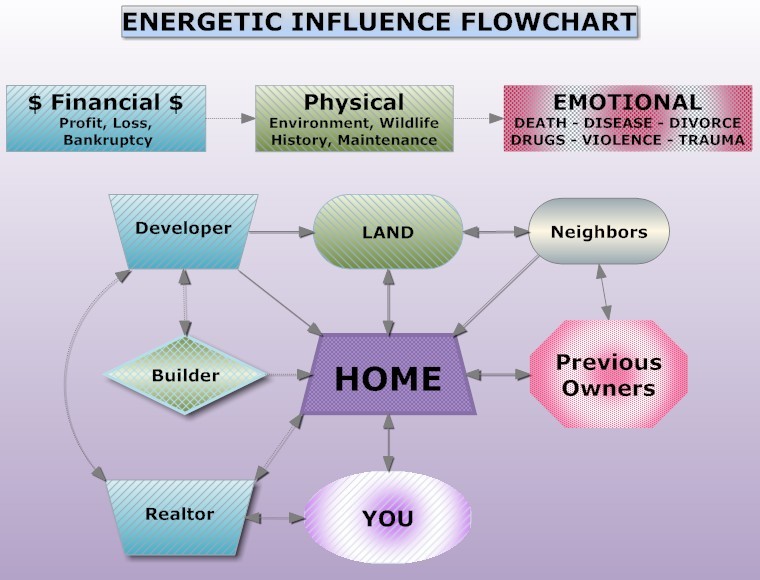 Other than the land itself, and whatever influence that may have on the house, and admitting the possibility of flood, fire, hail or space junk, all of the influences will be related to actual people.

Obviously, YOU will have a great deal invested in your HOME, in both the Financial and Emotional categories, which will leave you open to match the vibratory energy of everyone else along those same lines, and unable to see where related problems may exist.

Unless you are selling, your Realtor is the least likely to have a long term effect on the feel of your house, but whether they are acting for you, or are the listing agent, and whether the house is new, sets their Financial alignment on a personal level, which can have some effect. When selling your home, realtors are a much more important part of the puzzle.

Before the home is built, and depending on the era, the Developer contracted with the city to convert the land to housing. Loss of traditional lands, farms, animal habitat and greenspace can all have an impact, as may the Developers rationale for creating your home to begin with. The Developer’s relationships with the Builder and Realtor also play into the house’s energy.

The Builder is in direct relation to both the Developer and the HOME, and while some homes show careful craftsmanship and pride, many are slapped together with greatest speed being the primary motivator. In today’s age of subcontracting, the builder may never even show his face, and hope that all of the subs do their job reasonably well. This does not leave a house feeling pride in its own existence.

Oddly enough, the neighbors, and the homes historic relationship with neighbors who may no longer exist, seem to retain some bandwidth in a home’s energy field. The neighbor whose house you don’t like, before you’ve ever met them, may be a sign that there was some altercation long before you ever moved in.

The Previous Owners will usually have the most to do with the immediate feel of the house. It may not be the sellers, the Original Owners, or occasionally someone in between, may have lived through such an intense period that their energy set the tone for years to come. In any case, the Previous Owners include adults and children, and the events that can have an effect range from death to divorce to drug use to child abuse and more. In every case, I have found that the vibrational pattern set by these previous owners sets the tone for the new owners or tenants, in that it is much easier for you to sink into the existing low vibrational level or pattern, than to try to raise the frequency.